So, one night (23 Jan ’13, Weds to be exact ;), I couldn’t sleep… then I still couldn’t sleep… not to mention I was out of tobacco (which is still harrowing)! Finally, it was almost time to get up! ‘Might as well go do temp labor,’ I thought.

Got there at 5:30, found someone with nicotine by 5:45. I was so relieved, I didn’t care what happened the rest of the day, PLUS, I was first in line, which sometimes makes a difference in where one gets sent.

I got assigned to go work on the turnpike… unique and different but really not that significant. Waterproof boots, vest, gloves and hardhat were required (rental and purchase cost me $3.50!). Went to take my drug test; passed, of course. Got to the location, had to drive over God-knows-what to park in the grass… One of the supervisers picked me up to drive me to my ‘station’ on the 8-mile project. He tailgated as the sun streamed right into his eyes while I held tightly to my seatbelt!

About 2 years ago, the same temp agency had sent me 45 minutes away to another road project. I was too honest not to confess to the supervisor that I wasn’t certified for the big machine that spews out water in preparation for the mud-smoothing vehicle, and got sent back. Well (!), the guy at the wheel on this day was the same guy from long-ago and, BOY was I glad I had told the truth back when!

In any case, I got dropped off and instructed to pry off cement scraps from the vertical part of the curb as part of the cleaning process before they lay the ‘carpet’, which goes under cement, tar and whatever other layers…

I had assumed that, being between the west- and eastbound lanes of a major turnpike, I would have to focus and tune it all out, BUT, crazily enough, it was very peaceful! I did have a touch of anxiety about the possibility of an out-of-control driver careening into the median, but managed to keep it at a manageable level (not to mention, it was one of the most beautiful days, weather-wise, you’ve ever seen! [which meant that the Port-A-Potty was only half the ordeal it is usually 😉 ] ). 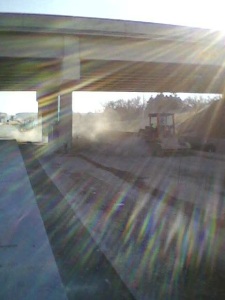 The great thing about day labor work is that you get into a rhythm and because it’s repetitive, you can all but meditate… This particular site is so long that the nearest other worker was hundreds of yards away. I sang, I screamed, I swore and had the time of my life! 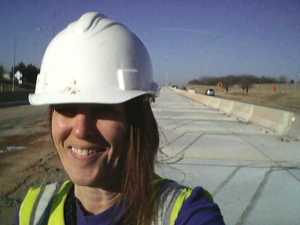 Shortly, I was like, OMG! how many times in one’s life does one get to work in the middle of the turnpike?! and started snapping pics. My second task was to consolidate cement scrap piles. This is before I started:

By and by the burrito truck arrived and I promise, it was the best one I’ve had in years (kinda like when ya have hot dogs at camp, ya know?)! 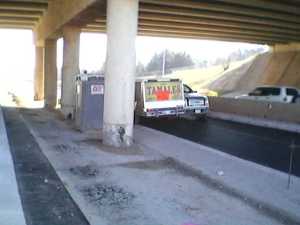 Pretty soon, they ran out of stuff for me to do and transported back to my car. I already felt jubilant, what with being outside and being able to fully raise my voice (I would never in my condo [don’t get excited, it’s an efficiency, lol (and all the kingdom I need right now) ] because I don’t wanna disturb my neighbors…). Another part of mustering all my wherewithal to go do what  I usually dread is that, once I’m clocked in, all the screaming about ‘WHAT ARE YOU GONNA DO TO PAY BILLS???!!!’ stops because I’m doing it. 😀

The guy who signed off paid me for two extra hours, which sent me further into joy… So, if you ever have a chance, you gotta do it, at least once. Lesson for me: what I feared would be another soul-annihilating day turned out to be amazing, and an opportunity for me to loudly proclaim and express melodies without causing another mental anguish or getting arrested for damaging their hearing. 😉

This site uses Akismet to reduce spam. Learn how your comment data is processed.